In a world where crash equals cash, Monster Trucks are king of the thrill.

To the jaded eye, it’s all shrill and no skill,a sport full of mud and Bud. But peek under the hood of Monster Truck mania, and your gears are bound to start turing. One flash of the TV spotlight, one whiff of a just­ blown engine, one gander at a juiced-up Ford-and you’ll be asking yourself where the dirt comes from, who builds the megaton trucks, and why everyone from yuppies to Okies is making Monster mania the specta­tor adventure  of the 90’s. 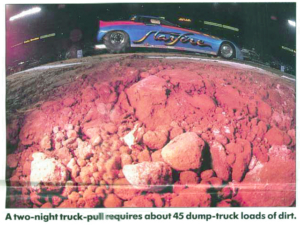 Where does a 12-foot-high, 12-foot-wide, 14,000-pound Monster Truck come from? The Black La­goon? Outer space? Most Mon­sters are lovingly built by drivers and their friends in back yards and little garages around the country. S0me big outfits, like Bob Chandler’s Midwest Four-Wheel ­Drive and Performance Center, have master mechanics who have created a cottage industry of turning Monsters out for others. Trucks start at $100.000 and take a year’s worth of work to produce. Many have hand-built frames and custom-made suspen­sion systems with at least four shocks per wheel. The trucks can be steered from both the front and the rear, but the cabs stand so high that a driver must lean out the side window to see where he’s going. When you own one of these things,” one philosopher ­driver explains. “you eat. sleep. and drink it.”

Who survives the “Battle of the Monster Trucks”? In the wheel­stand event, an applause-o-meter determines the winner, whereas the fastest Monster to jump over five cars and race around a speci­fied section of track wins in the timed drag race. And in the leap­ing event-the most spectacular part of the program-the truck that jumps the farthest over five .
cars wins.

It costs about $40,000 to lay down 450 cubic yards of New Jersey and Staten Island soil for a two-night truck-pull at New York City’s Mad­ison Square Garden. The track is about 200 feet long, 45 feet wide, and one foo1 deep. (A mud-bog track is slightly shorter and nar­rower. reaching its chocolate­ mousse-like zenith at four feet.) That much dirt translates into roughly 45 dump-truck loads. “We have hundreds of thousands of dollars· worth of dirt stashed around the country,” says Norh h America’s top truck-show pro­moter, Steve Greenberg, Who uses the same earth year after year. “In New York we rent space for it near the West Side HighWay, and in Philly we store it under I-95. We’re one or the biggest real es­tate holders in North America!”

Each Goodyear Terra Tire-the favorite or Monster drivers-is five and a half feet high, three and a half feet wide, weighs 680 pounds, and costs $2,800. The “large lug” treads are as thick as Rambo’s arm.
Their use by the Monsters has even the experts scratching their heads. Most of the time you’ll find Terra Tires on something like a manure-spreader or a log skidder.) ”It’s weird,” says Dave Russ. a Goodyear spokesman. “They’re flotation tires, designed wi1h a wide footprint to distribute a truck’s weight evenly over the soil, so as not to disturb it. So it’s ironic to see those things raising may­hem all over the place, jumpin’ on cars and breakin’ glass-the whole nine yards.”

“At any given show, 10 to 30 per­cent of the audience is under age 12,” says Greenberg. ”That’s what’s created [the sport’s] phenomenal growth.” No surprise, then, that he buys commercial time on car­toon shows and the family-ori­ented 5 to 7 p.m. TV slot.
An average truck-show ticket costs adults $15, but kids pay only $8-not much more than a ticket to the latest slasher movie. It’s of­ten the kids Who gobble up special-edition Bigfoot Happy Meals at McDonald’s, watch the monsters on TV, and buy the video tapes (Bigfoot: King of the Monster Trucks sold nearly 50,000 copies in 1988, at $24.95 each). They also buy model Monsters for between 10 and 500 bucks a pop – though promoters hope that kids will spring for the real thing when they turn 16. The Ford F-series pickup truck, on which most Monsters are based, is, for the seventh straight year, the most popular vehicle of any kind on the road.

Marketing strategies developed by Monster Truck promoters demonstrate a subtle but perverse genius. In 1987 – while a tremendous controversy brewed over trade restrictions between the U.S. and Japan – a “Stand Up for America Day” at the Pontiac Silverdome (near Detroit) fea­tured the annihilation of Hon­das, “Toyotas, and Mazdas, to the xenophobic delight of laid-off auto workers.
At the “Yuppie Bash,” the blue­ collar denizens of Worcester, Massachusetts-a mill town –  gleefully watched a mannequin equipped with a Polo shirt, red suspenders, Docksiders, a bottle of’ Chardonnay and Brie get squashed in an old Audi. New York City, home of the Metropoli­tan Museum of Art and gridlock, hosted both an “E-Limo-Nation” and a “Cab-Tastrophe” to great acclaim. And terminally square New Jersey treated fans to “The Feast on the Beast,” a gourmet dinner on the back of a Monster Truck.

“A national phenomenon, the fastest-growing motor sport in the entire country, and one of the fastest growing of all sports.” – The Wall Street Joumal
“Monster trucking is about power pure and unopposed.” – Newsweek
”Part sport, part a celebration of the American romance with raw mechanical power, and part big business. “-The New York Times
“Far from being a joke, this event has for its adherents an importance that borders on the holy.”-The Village Voice
“‘This was euphoria.”-The Tampa Tribune
“America’s new favorite cultur­al event” – Dan Rather

Most sacrificial jalopies come from junkyards near the arenas for $50 to $7 5 apiece-or, if wreckers are shrewd, from cars­ for-tickets trades. 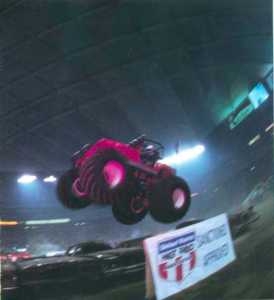 Surveys in Minneapolis and Den­ver found that 83 percent of audience members were male, 79 percent owned at least one truck, and the average household in­come as $34,000. “It’s the Urban Cowboy angle,” promoter Steve Greenberg says. “The love of power is universal. People everywhere like to see things go crunch!”
A a typical show, the crowd is predominantly 18- to 34-year-old, hard-living, beer-drinking, en­gine-tweaking white males who enjoy a good Charles Bronson flick. More than a few cadaverous ­looking patrons-teeth akimbo, ­resemble escapees from a Far Side cartoon.
On the other hand, Monster Trucks are now being marketed as “something different to do on the weekend.” A Madison Square Garden show last March attracted Rastafarians, septuagenarians. punks, Oriental families, German commodities brokers. and a sur­prising number of pastel sweaters dotting a field of black motorcycle jackets. Could it be? Monster Trucks .. gentrified?

Milk Duds, popcorn, cotton can­dy, Sno Cones … ear plugs??? Yep. A must-buy  at a Monster show. “Concessions are the lifeblood of an arena,” Chicago promoter Rick Bjorklund says. “and with Dad drinking a couple of beers and the kids buying hot dogs and T-shirts, we do very, very well at a truck event.” For an average crowd of 12,000 people, a mid­sized stadium in the heartland will sell $30,000 worth of food and drinks, $18,000 in parking, and $10,000 in assorted novelties (“trash ‘n’ trinkets”). “Our gross sales at a truck show are as good as any event w’e do,” says Bjorklund, chortling. 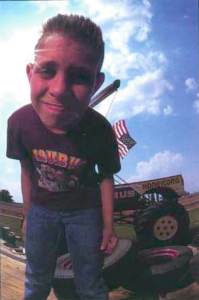 The “Car Crush” may be the most outrageous motor sport around, but Truck-pulls take a big chunk of time from, a four-hour “Traction ­Action” show. An outgrowth of 19th-century horse-pulls-in which Farmer Jones bet that his team could drag a heavier rock farther than could Farmer Smith’s team-today’s U.S. Hot Rod Association (USHRA) Truck and Tractor Pull has 1,000-horsepow­er, super-modified trucks (some with flaming engines) that drag a 50,00o-pound sled along a dirt track until mud flies and they can go no farther. And it’s L-O-U-D. Engines often blow.

The USHRA “Mud Bog” goes like this: Take a Rube-Goldberg­-esque four wheel drive jeep, pump it up with high-octane hormones, paint it candy-apple red, and drive it through a “specially calculated mud-running pit” (four feet of man-made ooze) as far and as fast as possible.

Often, you stall and sink into the mire. The fans love you for this. Even if you make it, you and your machine any anything within 200 feet are dripping with grayish-brown goo. True mud afi­cionados kill for the seats directly behind the starting line, where they’re guaranteed to get sprayed with mud on every run. As one wild-eyed fan puts it: “I hate the Monster Trucks. The truck-pulls are boring. I’m here for the mud. dude!”