“A Revolutionary in Pearls”: CBC’s Anna Maria Tremonti and I dish on Julia, with help from a few friends

The first television celebrity chef Julia Child broke all the rules. The American who mastered French cuisine not only changed the way America ate, she changed a nation’s perception of food.
And it all started in 1961 with the publishing of Mastering the Art of French Cooking, when Child launched on a journey into educating people to try new ways of eating.
Child’s grandnephew Alex Prud’homme chronicles her success starting in her 50s in French Chef in America and tells The Current’s Anna Maria Tremonti why he describes his great aunt as a “a revolutionary in pearls.”
“On the one hand she was a patrician woman, traditional in certain ways, a defender of tradition in French cooking, Prud’homme says. Chef Julia Child sits in her kitchen after it was moved and rebuilt from her Cambridge, Massachusetts, home as part of an exhibit at the National Museum of American History in Washington, D.C., Aug. 2002. (Tim Sloan/AFP/Getty Images)

And yet in her personal life she was a revolutionary. She was upending the shibboleths and the standards of the day.
In the early 1960s, Americans were eating ready-prepared foods like Jell-O and Velveeta cheese.
“Space age horrible food,” explains Prud’homme.
“All the advertising was let us help you little woman in the kitchen. Let’s make easy, you don’t have to worry about this stuff.”
He tells Tremonti that Child’s recipes took the exact opposite approach which was to “show you how to make a great meal which requires some work … you get your hands dirty.”
“And people really responded to that as a reaction to all that commercial glop they were being fed.”
Child taught with gusto — to have fun while making mistakes and learning from them.
“She mixed humour with teaching in a very compelling way.  That’s sort of her secret sauce,” says Prud’homme.

The success of her television show The French Chef created a demand for ingredients like leeks and fresh mushrooms to be stocked in local grocery stores. Department stores would sell out of pans and gadgets like the garlic press once they were featured on television.
Prud’homme tells Tremonti that Child’s constant tasting and saying “oh, it’s so delicious,” made you want to cook.
“It made you want to dive through the tv to eat that beef bourguignon, or that tarte tatin.” 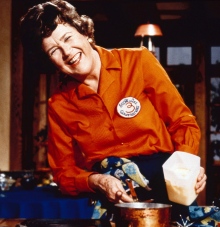 Julia Child was famous for using large quantities of butter in her recipes. (Courtesy of the Julia Child Foundation/Schlesinger Library)

Unlike celebrity chefs today, Child took care to maintain her independence.
Chef Jacques Pepin who often appeared with Child shares a story of snubbing sponsors on the program.
“I remember a time when we cooked and the sponsor was Kendall Jackson. The producer told me what kind of wine are you going to serve? And I had plenty, plenty of wine to choose,”
In addition to that we did consume a fair amount of wine on the show,” Pepin recalls.
“So in the end I asked her, ‘Do you want a cabernet or a merlot?’ She said, ‘I want beer.’ I said, ‘What do you mean you want beer? We don’t have beer?'”
Pepin says Child then pulled a beer fom under the table.
That independence was important for Child says Prud’homme and tells Tremonti she gave up multiple endorsement opportunities, missing out on making money. 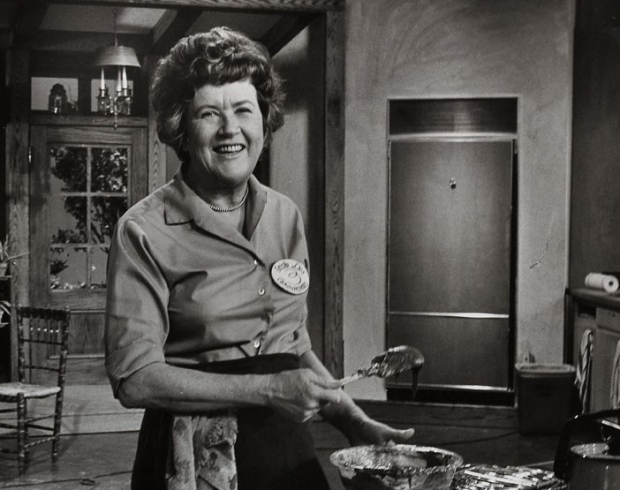 The secret to Julia Child’s success was she mixed humour with pedagogy. says grand nephew Alex Prud’homme. (Harvard University, Schlesinger Library on the History of Woman in America)

On the celebrity chefs of today, Prud’homme thinks that Child would have mixed feelings about the corporate empires with television shows and publishing deals, combined with restaurant and food-related product lines.
But he says Child would have been delighted at the sophisticated foodies everywhere and amused by the food cooking competitions that modern celebrity chefs engage in.
This segment was produced by The Current’s Sujata Berry.
Originally posted at CBC Radio
Hey Vermonters — I’ll be reading in Manchester Dec 10 — join us!
Talking turkey and Julia with WBUR’s Deborah Becker