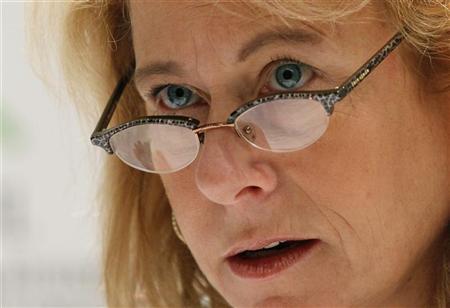 (Reuters) – Anglo American’s (AAL.L) Chief Executive Cynthia Carroll stepped down on Friday after more than five years in the job, under increased pressure from investors over the miner’s lagging share price and continued dependence on troubled South Africa.
A geologist by training, Carroll became the first non-South African, the first woman and the first outsider to take the top job at Anglo when she became CEO in 2007.
Brushing aside suggestions she was pressured to leave, Carroll and Chairman John Parker, her long-standing supporter, said the decision was her own, as she entered a seventh year in a “very grueling and demanding role”.
Carroll’s efforts to streamline what was a sprawling conglomerate, to cut billions in costs and to shift Anglo’s centre of gravity away from South Africa initially won support.
But her relationship with investors became more troubled after acquisitions like the Minas Rio iron ore project in Brazil, an early bid to diversify Anglo’s portfolio, became mired in cost overruns and delays.
Anglo has yet to give a final cost estimate for the project but analysts say they could rise to $8 billion from current figures of $5.8 billion.
“Institutional pressure has been building for some time to replace Cynthia, so the news will be welcomed,” one of Anglo’s 15 largest shareholders said.
“Ultimately, running Anglo is one of the toughest jobs around and, although Cynthia made a good start as CEO, the feeling is the company has gone backwards in the last two to three years.”
Other investors also pointed to a mixed record at the top.
“Her strategic moves didn’t always hit the mark. The acquisition of Minas Rio, promptly followed by a dividend cut, was a particular low point,” another of Anglo’s 15 biggest investors said.
Crippling strikes in platinum and iron ore mines in South Africa over the last weeks have revived long-standing worries over Anglo’s exposure to the country, aggravating concerns about a share price that has underperformed its peers.
Despite cost cuts, analysts at Macquarie say that under Carroll, Anglo has lost one-third of its value on a U.S. dollar market capitalization basis and is now worth $25 billion less.
Other major miners are worth at least the same as they were at the start of 2007.
So far this year, Anglo stock has lagged the sector by almost 20 percent. Shares jumped on news of Carroll’s departure and at 0825 GMT were up 1.6 percent at 1887.5 pence, while the European basic resources index .SXPP was down 0.7 percent.
WHO’S NEXT?
The board said it would not rush to pick a successor for Carroll and that the 55-year-old would stay in place until a replacement was appointed, which could take months.
“For whoever comes in, the challenge of Minas Rio and the challenge of restructuring the platinum industry in South Africa doesn’t go away,” said analyst Des Kilalea at RBC in London. “To some extent, it’s probably the most difficult mining company to manage at the moment.”
Industry analysts, industry sources and investors point to at least two likely successors for Carroll – Brazilian Alex Vanselow, the former chief financial officer of BHP Billiton (BLT.L) and South African-born Mick Davis, the outgoing chief executive of Xstrata (XTA.L).
Parker – in a reference to a storm over Davis’ pay, one of the highest on Britain’s FTSE – said Anglo could not afford him.
The biggest immediate challenge for Carroll’s successor is likely to be South Africa, where strikes have spread to Anglo American Platinum (AMSJ.J), the world’s top producer of the precious metal. The unrest has revived talk of a split or a cut in Anglo’s stake in Amplats – something Carroll opposed.
Strikes also hit Anglo’s Kumba iron ore (KIOJ.J) unit, which alone accounted for almost half the group’s operating profit in the first half of the year.
Kumba’s Sishen mine has begun to ramp back up, but Amplats workers have not yet returned to the Rustenburg, Union and Amandelbult operations, which include some of its most labor intensive shafts, and those that have suffered deepest margin compression since 2008.
(Reporting by Clara Ferreira-Marques; Additional reporting by Sinead Cruise, Kate Holton and Brenton Cordeiro; Editing by Jane Barrett)

JC 100 event at the 92d St. Y on Sunday evening – join us!
Breaking: Rising Seas Will Keep Rising – keep your hip-waders on!